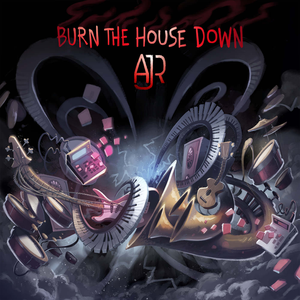 Burn the House Down
electronic not indie not alternative 2018 single
‘Burn The House Down’ is a song by the indie pop band AJR. It was used as the theme song for director Morgan Spurlock’s documentary, Super Size Me 2: Holy Chicken. They wrote it once they watched it and said "We were blown away after watching the film, and we immediately connected with Morgan’s passion as an underdog trying to shed light on this corrupt giant… We wanted to create a song that captured that passion. If enough underdogs band together Read more on Last.fm.

AJR is a New York City-based indie pop band composed of brothers Adam, Jack, and Ryan Met (born Metzger). The band is a DIY pop group who write, produce, and mix their own material in the living room of their Chelsea apartment. Their music style has been described as "eclectic", combining elements of pop, barbershop, electronic, and dubstep music. They have opened for Demi Lovato, Hoodie Allen and the Wanted. In Summer 2014 the band went on tour with Lindsey Stirling. There is no band, no song, no video, no sound, that is more “now” than AJR. The band — three brothers born and raised in New York City — has achieved a startling quick level of success with “I’m Ready,” a buoyant electro-pop single that’s taking off on social media. The numbers: over 1.5M views on YouTube, thousands of singles sold each week, features in Billboard, the NY Post, and on MTV. Festival performances in front of 10,000+ people. Read more on Last.fm. User-contributed text is available under the Creative Commons By-SA License; additional terms may apply.