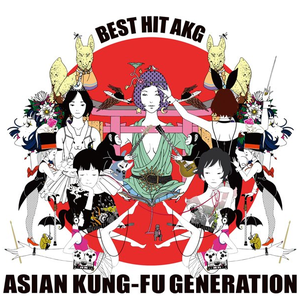 
Asian Kung-Fu Generation (アジアン・カンフー・ジェネレーション Ajian Kanfū Jenerēshon, stylized as ASIAN KUNG-FU GENERATION) is a Japanese alternative rock band formed in Yokohama, Japan, in 1996. For nearly its entire career, the band has consisted of vocalist Masafumi Gotō, guitarist Kensuke Kita, bassist Takahiro Yamada, and drummer Kiyoshi Ijichi. Starting out as a college band, Asian Kung-Fu Generation released a series of independent EPs featuring lyrics mostly sung in English. In 2002, they released their major-label EP debut Hōkai Amplifier, from that point singing their lyrics in Japanese. The band's musical style is influenced by seminal Western alternative rock acts as well as their own local Japanese indie-rock and punk scene. Their songs incorporate various aspects of the genres, most typically expressing fast tempos and prominent power chord guitar riffs in addition to rhythmic groove and emotional lyrics. Despite the indie nature of their music, the band has enjoyed worldwide commercial success in addition to critical acclaim. Asian Kung-Fu Generation has been cited as one of the best, most balanced modern rock bands to emerge from Japan in the 2000s. The four of them came together in the music club of their university in 1996; for Gotoh, Kita, and Yamada, ASIAN KUNG-FU GENERATION was the first band they ever formed. After a while, they began to perform at the school and in the local Yokohama area. Interestingly, their first songs were all written in English and, in fact, their first independent 6 track album (released in 2000) was entirely sung in English. The CDs were sold at concerts and over the internet. In 2001, beginning with "YMD" they held many self-planned events at Yokohama's CLUB24. Once "Konayuki," the first song in which they used Japanese lyrics, was completed, they sent copies to all the independent shows on the FM stations, and were consequently able to get their music played for the first time on FM radio. After that, they released their second CD of original works, this time using Japanese lyrics. It achieved great success within the region and at all the Live Houses. From this time on, starting at Shibuya, Shimokitazawa, Kichijouji and other places, they started putting on shows famed for their energy. In 2002, they submitted a track to the Underflow Records Compilation CD. In November of the same year, they released "Houkai Amplifier," their first Mini Album to be produced professionally. This album, which would decide their future, debuted in the number 1 spot of Highline Records weekly charts, and also made it to the number 35 spot in the Oricon Indies Chart. On April 4, 2003, "Houkai Amplifier" was re-released under Ki/oon Records. That summer, they appeared at FUJI ROCK (on the "ROOKIE A GO GO" stage), and at SUMMER SONIC '03 in Osaka. Following their October 16, 2003 single "Kimi to Iu Hana," their first full album "Kimi Tsunagi Five M" was released on November 19. From January 19 to February 25 2004, they went on the "five nano seconds" tour. All shows immediately sold out and were a massive success. In 2004, their first proper single "Siren" and their second single, the iconic "Loop & Loop," were released, the former on April 14th and the latter on May 19th. Their self-planned event ASIAN KUNG-FU GENERATION presents "NANO-MUGEN FEST" took place on July 1st at Nihon Budoukan and, that summer, they appeared live at festivals in areas all over the country. On August 4th, their new single "Rewrite" was released, followed by "Kimi no Machi Made" on September 23rd. On October 20, 2004, their long-awaited new album "Sol-fa" was released and this really pushed the band to the forefront of the J-Rock scene. Then, on November 2nd, they started their second national tour: ASIAN KUNG-FU GENERATION Tour Suihai No! June 8 2005 saw the release of "NANO-MUGEN COMPILATION," an album composed of songs from various acts, both Japanese and English-language alike. Included was their first single after "Sol-fa": "Blackout." Later, the band released their first real single in over a year; "Blue Train." In 2006, the band released another single "World Apart," followed by their third album, "Fanclub." A month later, they released their latest album "Feedback File," which includes live versions of some of their most popular tracks. Their song "Haruka Kanata" was chosen to be a theme song for the anime series "Naruto," and the popular single "Rewrite" was selected as a theme song to the hit anime series "Fullmetal Alchemist." The song "Aru Machi no Gunjou" was used in the animated movie "Tekkon Kinkreet," and the song "After Dark" was used as a theme song for the animated series "BLEACH." The song "Maigo Inu to Ame no Beat" was used as the opening theme for the anime "The Tatami Galaxy". Read more on Last.fm. User-contributed text is available under the Creative Commons By-SA License; additional terms may apply.