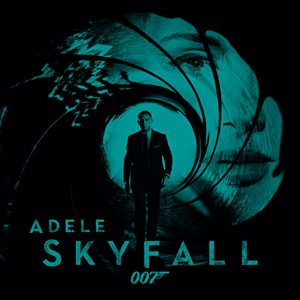 Film Music 2012
Soundtrack pop james bond female vocalists Adele
"Skyfall" is a song recorded by Adele for the James Bond film of the same name. The film company Eon Productions invited the singer to work on the theme song in early 2011, a task that Adele accepted after reading the film's script. While composing the song, Adele and Epworth aimed to capture the mood and style of the other Bond themes, including dark and moody lyrics descriptive of the film's plot. "Skyfall" was released at 0:07 BST on 5 October 2012 as part of the Global James Bond Day, celebrating the 50th anniversary of the release of Dr. Read more on Last.fm.

Adele Laurie Blue Adkins, (born 5 May 1988), is a multiple Grammy Award-Winning English singer-songwriter from Tottenham, North London. Her debut album, 19, was released in January 2008 and entered the UK album chart at #1. The album has since received four-times Platinum certification in the UK and has sold 5,500,000 copies worldwide. The album included the hugely popular song Chasing Pavements. 19 earned Adele two Grammy Awards in February 2009 for Best New Artist and Best Female Pop Vocal Performance. Her second album, 21, was released on January 24th 2011 in the UK and propelled Adele to unprecedented mega-stardom. In just eleven months, 21 received fourteen-times Platinum certification in the UK for shipments in excess of 4,500,000 copies, and has sold a further 6,200,000 copies in the US denoting sextuple-Platinum status. As of January 2012, 21 has sold an estimated seventeen million copies worldwide. The album has produced three global chart-topping singles thus far: Rolling in the Deep, Someone Like You, and Set Fire to the Rain. 21 won Adele six awards at the 2012 Grammy Awards, among them Album of the Year, Song of the Year and Record of the Year. Adele graduated from BRIT School in Croydon in May 2006, where she was classmates with Leona Lewis. Adele credits the school with nurturing her talent. In school, she was more interested in going into A&R, and hoped to launch other people's careers. Four months later, she published two songs on the fourth issue of the online arts publication PlatformsMagazine.com. She had recorded a three-song demo for a class project and gave it to a friend who posted it on Myspace where it became very successful and led to a phone call from music label XL Recordings. She doubted if the offer was real because the only record company she knew was Virgin Records, and she took a friend with her to the meeting. Nick Huggett at XL Recordings recommended Adele to manager Jonathan Dickins at September Management and in June 2006 Dickins became her official representative. September was managing Jamie T at the time and this proved a major attraction for Adele who was a big fan of the English singer-songwriter. Huggett then signed Adele to XL Recordings in September 2006. Adele's breakthrough song, Hometown Glory, was released in October 2007. Adele provided vocals for Jack Peñate's song, My Yvonne, from his debut album. Adele became the first recipient of the BRIT Awards Critics' Choice and was named the number-one predicted breakthrough act of 2008 in an annual BBC poll of music critics, Sound of 2008. She released her second single Chasing Pavements on 14 January 2008, two weeks ahead of her debut album, 19. Chasing Pavements reached number two on the UK Chart, and stayed there for four weeks, finally remaining in the Top 40 14 weeks after its release. The album itself entered the British charts at number one. The Times Encyclopedia of Modern Music would name 19 an "essential" Blue Eyed Soul recording. In June 2013, Adele was awarded an MBE in the Queen's Birthday Honours list for services to music. The much-anticipated third studio album "25" was released on November 20, 2015 on the label XL. The first single from the album, "Hello", was released on Friday, October 23, 2015. Grammy Awards (2017) - At the 59th Grammy Awards on Sun, February 12, 2017, Adele took the awards for "Album of The Year" and "Best Pop Vocal Album" for "25". and "Song Of The Year" and "Best Pop Solo Performance" for "Hello". Adele is set to release her fourth studio album, the hotly-anticipated 30, on November 19, 2021. It will be preceded by lead single "Easy on Me," which is due out on October 15. Read more on Last.fm. User-contributed text is available under the Creative Commons By-SA License; additional terms may apply.