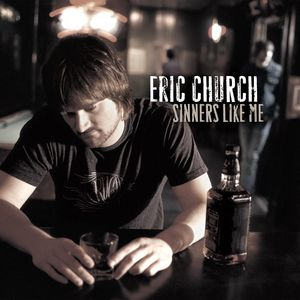 
Eric Church is a country singer-songwriter. He has released nine studio albums through Capitol Nashville since 2005. His debut album, 2006's Sinners Like Me, produced three singles on the Billboard country charts including the top 20 hits "How 'Bout You", "Two Pink Lines", and "Guys Like Me". His second album, 2009's Carolina, produced three more singles: "Smoke a Little Smoke" and his first top 10 hits, "Love Your Love the Most" and "Hell on the Heart". 2011's Chief, his first #1 album, gave him his first two #1 singles, "Drink in My Hand" and "Springsteen", and the hits "Homeboy", "Creepin'", and "Like Jesus Does". His third #1 single was "The Only Way I Know", which he, Jason Aldean, and Luke Bryan recorded for Aldean's album Night Train. A fourth album, The Outsiders, was released in February 2014. It produced five new singles between 2013 and 2015 with the title track, "Give Me Back My Hometown", "Cold One", "Talladega" and "Like a Wrecking Ball". "Talladega" and "Give Me Back My Hometown" each reached #1 on the Country Airplay chart. Eric Church got his sixth #1 hit with Keith Urban in May 2015 with the single "Raise 'Em Up". His fifth studio album, Mr. Misunderstood, was released in November 2015 and went on to produce two #1 singles with "Record Year" and "Round Here Buzz". On July 13, 2018, Church released the first single and title track of his album Desperate Man, which was released in October 2018. In April 2021, Church released the double album set Heart & Soul. Read more on Last.fm. User-contributed text is available under the Creative Commons By-SA License; additional terms may apply.

Springsteen Love Your Love The Most Drink in My Hand Sinners Like Me Guys Like Me Smoke a Little Smoke Two Pink Lines These Boots What I Almost Was Before She Does Homeboy The Hard Way Lightning Creepin' Can't Take It With You Hell On The Heart Like Jesus Does How 'Bout You Talladega Livin' Part Of Life Record Year Give Me Back My Hometown Over When It's Over Like a Wrecking Ball Jack Daniels Pledge Allegiance To The Hag Carolina Keep On Hungover & Hard Up Hell Of A View I'm Gettin' Stoned Mr. Misunderstood Round Here Buzz Kill a Word Country Music Jesus The Outsiders Ain't Killed Me Yet Lotta Boot Left To Fill Desperate Man Some of It Cold One Without You Here Young And Wild Heart On Fire Those I've Loved Where She Told Me To Go His Kind Of Money (My Kind Of Love) You Make It Look So Easy Longer Gone Stick That in Your Country Song