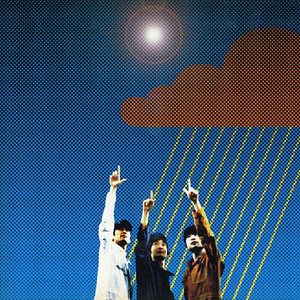 
Fishmans (フィッシュマンズ) were an influential Japanese dub band formed in 1987. They were ranked number 83 in a list of Japan’s top 100 musicians provided by HMV, and are renowned for their unique sound and the distinctive vocals of lead singer Shinji Sato. The band was formed in 1987 by Sato (vocals, guitar, trumpet), Kin-Ichi Motegi (drums, vocals, sampler) and Kensuke Ojima (guitar and vocals). The addition of Yuzuru Kashiwabara (bass) and Hakase (keyboards) rounded up the original line-up. Their first recorded appearance is on the 1989 Captain Records' compilation Panic Paradise. Two years later, their first album Chappie, Don't Cry was released. The band’s easy-going sound (mainly influenced by reggae and dub, but also including elements of rock, pop, drum & bass, hip-hop, etc.), coupled with Sato’s androgynous vocals, gained them acceptance in Japan’s underground scene. Fishmans released several albums on Pony Canyon records, slowly moving away from a strictly reggae sound, but always keeping a dub foundation, powered by Motegi and Kashiwabara’s rock-steady rhythm section. In 1995, they signed with Polydor Records. By then, both Kensuke Ojima and Hakase had left the band. Neither was replaced, and the resulting trio would work with a series of guest musicians on their next records, mainly Honzi (keyboards, violin, accordion and vocals) and Darts Sekiguchi (guitar). The addition of producer ZAK on sound mixing rounded out this second phase of the band, which further evolved its sound to incorporate space rock, ambient and shoegaze elements. Song length started to grow as well, as these new tendencies blended in with their dub foundation. 空中キャンプ (Kūchū Camp) was released in 1996, and included what is probably the band’s most famous song, Nightcruising. This was followed by LONG SEASON, a 35 minute song divided into 5 parts. Their final studio album, 宇宙 日本 世田谷 (Uchū Nippon Setagaya), was released in 1997. Fishmans performed their final concert on December 28th, 1998, later released as the live album 98.12.28 男達の別れ (Otokotachi no Wakare). They played many of their best songs, and concluded with a full performance of Long Season. Sato left the stage immediately after a single "goodbye" with his eyes teary. This was to be Kashiwabara’s final performance with the band, though Sato and Motegi planned to continue working as Fishmans. However, Sato passed away March 15th, 1999 by unknown causes till this day. After Sato’s death, Kin-Ichi Motegi began working as a stand-in drummer for Tokyo Ska Paradise Orchestra(東京スカパラダイスオーケストラ), whose own drummer passed away around the same time. He eventually became a full-fledged member of the band and plays drums and sings lead vocals with them to this day. Kashiwabara, who had planned to abandon the music industry, eventually joined forces with Ooya Yuusuke (ex. LaB LIFe) to form Polaris, whose spacey and dubby tracks bore some resemblance to Fishmans’ sound in the late 90’s. The Fishmans story did not end there. Following Sato’s death, their popularity continued to grow. In 2004, a tribute album Sweet Dreams for Fishmans was released, and included covers by artists as diverse as OOIOO, Bonobos, and UA. This was followed by the albums Kuchu and Uchu in 2005, which included rare and unreleased tracks alongside their biggest hits. On November 22, 2005 the remaining members of Fishmans paid tribute to their fans and Shinji Sato, by performing at the Rising Sun Rock Festival. The show lasted three and a half hours, and featured many guest singers, who performed the vocals. The following month, a tribute art exhibition The Long Season Rewind was held in Shibuya with contributions from various artists. Most recently in 2006, The Long Season Revue was released on DVD. The live concert was originally only screened in theatres and it featured the original members of the band together with a cast of supporting musicians such as UA, Asa-Chang, ハナレグミ, Oki Yuichi (of 東京スカパラダイスオーケストラ) and 原田郁子 of Clammbon (クラムボン). Following these concerts, Honzi, long-time contributor with the band, also passed away. Read more on Last.fm. User-contributed text is available under the Creative Commons By-SA License; additional terms may apply.