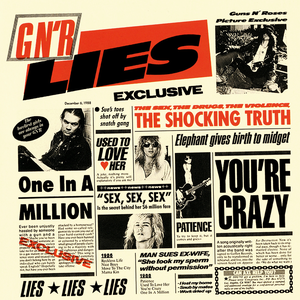 2 for 1: Appetite for Destruction + G N'R Lies
hard rock rock classic rock Guns N Roses 80s
"One in a Million" is a song by American hard rock group Guns N' Roses (GN'R). It is the eighth track on the album G N' R Lies and was released in 1988. The lyrics describe GN'R singer Axl Rose's experience of getting hustled in the Greyhound bus station upon first arriving in Los Angeles. The song is notable not only for its controversy, but also for being one of the first Guns N' Roses songs that Axl Rose wrote solo. According to interviews at the time Read more on Last.fm.

Sweet Child o' Mine Welcome to the Jungle Paradise City November Rain Knockin' on Heaven's Door Patience Live and Let Die Don't Cry Civil War You Could Be Mine Yesterdays Nightrain It's So Easy Mr. Brownstone Don't Cry (original) My Michelle You're Crazy Rocket Queen Out ta Get Me Since I Don't Have You Think About You Estranged Anything Goes Chinese Democracy Ain't It Fun Used To Love Her 14 Years Better Sympathy for the Devil You Ain't the First Dust n' Bones So Fine Right Next Door to Hell The Garden Don't Damn Me Perfect Crime Dead Horse Bad Obsession Double Talkin' Jive Back off bitch One in a Million Get in the Ring This I Love Garden of Eden Breakdown Shackler's Revenge Shotgun Blues Street of Dreams Coma There Was a Time