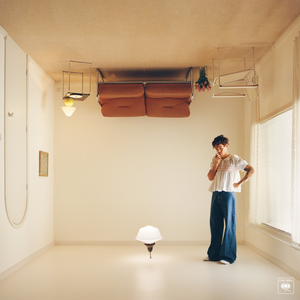 Harry’s House
pop rock pop rock punk indie pop
“Daylight” is the fifth track off Harry Styles' third studio album "Harry’s House". Styles unveiled the song a day before its release at the Citi Concert Series for the TODAY show. The song focuses on a lover who pushed Harry away despite all his affection for her. In a May 2022 interview for the Howard Stern Show, the British singer declared that “Daylight” was written in a “stream-of-consciousness” style after ruminating on a relationship all night—the band stayed up until daylight to finish composing the song. Read more on Last.fm.

Harry Edward Styles (born 1 February 1994 in Redditch, Worcestershire, England) is a Grammy-winning, British singer, songwriter, and actor. As a member of the British (&Irish) boy band One Direction, singer Harry Styles topped the charts, toured the world, and sold millions of albums before going solo in 2016. Styles was raised in Holmes Chapel, Cheshire, and he made his first foray into music with a high-school band named White Eskimo. In 2010, he left home and joined the seventh season of The X Factor, where fate and (TW) Simon Cowell would eventually lead him toward a life-changing opportunity with four other young men. As One Direction, Styles and his group mates Zayn Malik, Louis Tomlinson, Niall Horan, and Liam Payne would release five albums from 2011 to 2015, hitting number one across the globe and selling millions of records to an adoring and rabid fan base that drew comparisons to the fervor at the height of Beatlemania. In early 2016, after Malik had already parted ways with 1D, the remaining foursome announced their indefinite hiatus. Months later, Styles signed a solo deal with Columbia Records. Reflecting the influence of childhood favorites like Queen, Elton John, Fleetwood Mac, The Rolling Stones, Freddy Mercury, and The Beatles, Styles' solo material took a more serious and rock-based approach, while still delivering the pop sound his faithful 1D fans desired. With the help of Grammy-winning producer Jeff Bhasker (who had worked with Kanye West and Bruno Mars), Styles put together a small band and, after rehearsing the songs, headed to Jamaica for two months to record an album. "Sign of the Times," a plaintive ballad, was released as its first single in April of 2017. The self-titled full-length followed in May and debuted at the top of the Billboard 200. After 2 world tours, Harry set to write his sophomore album "Fine Line" releasing the hit songs "Lights Up", "Watermelon Sugar" and "Adore You" as the singles. Fine line was released on 13 December 2019 by Columbia and Erskine Records. On March 14, 2021, Harry received the Grammy Award for Best Pop Solo Performance for "Watermelon Sugar" at the 63rd Annual Grammy Awards. He was also nominated for Best Music Video with "Adore You" and for Best Pop Vocal Album for his album "Fine Line". In May of the same year, Styles also won the Brit Award for British Single for "Watermelon Sugar". May 20, 2022, Styles released his 3rd album, titled “Harry’s House”. Single from this, “As It Was” went on to break world records and earn Styles the title (male) for the most streamed track on Spotify in 24 hours. Read more on Last.fm. User-contributed text is available under the Creative Commons By-SA License; additional terms may apply.