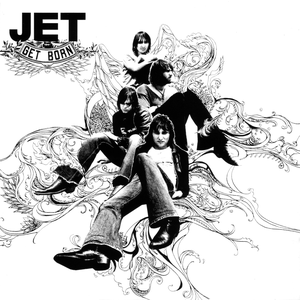 Get Born
rock alternative indie rock alternative rock indie
"Are You Gonna Be My Girl" is a song by the Australian rock band Jet, featured on their 2003 album Get Born. It was the first single from the album, released in 2003 in Australia and the UK, and in 2004 in the United States. The song is often cited for similarities to Iggy Pop's "Lust for Life" and The White Stripes' "Screwdriver". The group, in fact, says that they wrote the song based on 60s Motown music and particularly incorporated the beat from "You Can't Hurry Love" by The Supremes. Read more on Last.fm.

1. Jet was an alternative rock band which formed in 2001 in Melbourne, Australia. The band consists of Nic Cester (vocals, guitar), Cameron Muncey (guitar, vocals), Mark Wilson (bass) and Chris Cester (drums). They released three albums: "Get Born" (2003), "Shine On" (2006) and "Shaka Rock" (2009). The band has had international hits with the singles "Are You Gonna Be My Girl", "Look What You've Done", "Put Your Money Where Your Mouth Is" and "She's A Genius". The band split in March 2012. 2. Jet were a glam rock band from London. They released one eponymous album in 1975 before splitting up. The band formed in 1974 with a line-up of Andy Ellison (vocals, ex-John's Children, solo artist), Martin Gordon (bass, ex-Sparks), Chris Townson (drums, formerly in John's Children and Jook), David O'List (lead guitar, ex-member of The Nice and an early member of Roxy Music) and Peter Oxendale (keyboards for a short-lived live version of Sparks). The bulk of the band went on to become the punk/new wave band Radio Stars. 3. Before Black 'N Blue, Jaime St. James began his professional music career while a student at Cleveland High School, where he and classmates Dan Kurth, Barry Pendergrass, and Ray Malsom formed the Molly Hatchet-inspired combo Jet. Jet are featured prominently in the 1977 Legend, the yearbook of Cleveland High School. Read more on Last.fm. User-contributed text is available under the Creative Commons By-SA License; additional terms may apply.

Are You Gonna Be My Girl Look What You've Done Cold Hard Bitch Move On Last Chance Get What You Need Get Me Outta Here Take It Or Leave It Rollover DJ Rollover D.J. Radio Song Come Around Again She's A Genius Lazy Gun Timothy Put Your Money Where Your Mouth Is Shine On Bring It on Back Rip It Up Holiday Kings Horses That's All Lies Stand Up Black Hearts (On Fire) Come on Come On Skin and Bones Shiny Magazine Eleanor Seventeen All You Have to Do K.I.A. (Killed In Action) Are You Gonna Be My Girl? Sgt. Major Beat On Repeat Hold On La Di Da Times Like This Goodbye Hollywood Walk Let Me Out Start The Show She Holds A Grudge Hey Kids Will You Be My Girl? My Name Is Thunder Everything Will Be Alright Are You Gonna Be My Girl (acoustic version) Falling Star Back Door Santa Bruises (demo)