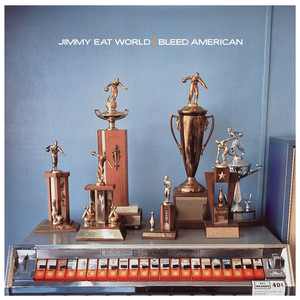 Bleed American
rock alternative rock emo alternative Jimmy Eat World
"A Praise Chorus" is a song by Jimmy Eat World. It was the fourth single released from the band's 2001 album Bleed American, which was later retitled Jimmy Eat World. With its carpe diem theme, the song has been described as a "celebration of adulthood". After the second stanza, seven songs become the "praise chorus" of the title. The first is sung continuously in the background; the other six are sung over this background-vocal track. During live performances Read more on Last.fm.

The Get Up Kids

The Middle Sweetness Bleed American Hear You Me Pain A Praise Chorus Work The Authority Song Your House Kill If You Don't, Don't Get It Faster 23 My Sundown Cautioners Futures Big Casino The World You Love Polaris Drugs or Me Always Be Lucky Denver Mint For Me This Is Heaven Night Drive Let It Happen Just Tonight Your New Aesthetic Believe in What You Want Table for Glasses Crush A Sunday Chase This Light Carry You Blister Electable (Give It Up) Last Christmas Here It Goes Just Watch the Fireworks Clarity Ten Dizzy 12.23.95 Gotta Be Somebody's Blues Feeling Lucky Firefight Nothingwrong Goodbye Sky Harbor My Best Theory Rockstar Seventeen