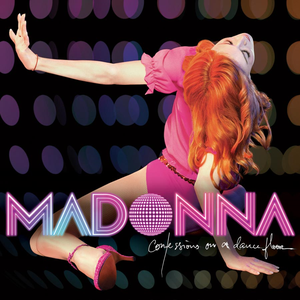 The Confessions Tour
dance pop Madonna Disco female vocalists
"Hung Up" is a electropop song written by American singer-songwriter Madonna, Stuart Price, Benny Andersson and Björn Ulvaeus, and produced by Madonna and Price. The song was released in October 2005, the first single to be lifted from Madonna's tenth studio album Confessions on a Dance Floor. "Hung Up" is Madonna's biggest selling single to date, reaching number one in a record-breaking 45 countries. Song information "Hung Up" was inspired by the 1970s disco era, in particular ABBA, Giorgio Moroder and Saturday Night Fever. Read more on Last.fm.