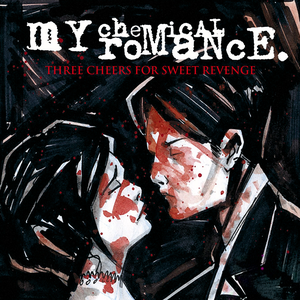 May Death Never Stop You
rock emo my chemical romance alternative punk
The song is about a man who is involved in a crime ("In the middle of a gunfight, in the center of a restaurant"). He believes that the police will be unable to catch him ("Well they're never gonna get me, I'm like a bullet through a flock of doves"), but he is arrested and sent to prison. The rest of the song refers to prison life: "Will they give me the chair or lethal injection or swing from a rope if you dare." This refers to the thoughts of the prisoner. Read more on Last.fm.

My Chemical Romance is an American rock band from New Jersey, United States formed in 2001. The band consists of lead vocalist Gerard Way, guitarists Ray Toro, Frank Iero and bassist Mikey Way. Shortly after forming, the band signed to Eyeball Records and released their debut album I Brought You My Bullets, You Brought Me Your Love in 2002. They signed with Reprise Records the next year and released their major label debut Three Cheers for Sweet Revenge in 2004; the album was a commercial success, and was awarded platinum status a little over a year later. The band eclipsed their previous success with their 2006 concept album, The Black Parade, which gained generally favorable reviews among music critics. Their fourth studio album, Danger Days: The True Lives of the Fabulous Killjoys, was released on November 22, 2010, to positive reviews. The band's final release was a series of singles, released over the course of five months, collected on the compilation Conventional Weapons. The band announced its break-up on March 22, 2013, one month after the final release in the Conventional Weapons series. On March 25, 2014, the band released May Death Never Stop You: The Greatest Hits (2001–2013), a greatest hits album containing material spanning their entire career, as well as some previously unreleased material. On Halloween of 2019, the band announced a comeback show in Los Angeles, California, and fans speculated that there was more to it than just a show. On November 5, 3 more shows were confirmed in Australia, New Zealand and Japan. On January 29, 2020, eighteen additional dates were announced in North America. May 12th of 2022, the band released The Foundations Of Decay solidifying their return as a band. Read more on Last.fm. User-contributed text is available under the Creative Commons By-SA License; additional terms may apply.

Welcome to the Black Parade Teenagers Helena I'm Not Okay (I Promise) Famous Last Words The Ghost of You I Don't Love You Dead! Cancer The Sharpest Lives Mama You Know What They Do to Guys Like Us in Prison Na Na Na (Na Na Na Na Na Na Na Na Na) This Is How I Disappear To the End Thank You for the Venom Give 'Em Hell, Kid House of Wolves Disenchanted Cemetery Drive Sleep The Jetset Life Is Gonna Kill You Hang 'Em High I Never Told You What I Do for a Living The End. Interlude SING Vampires Will Never Hurt You Demolition Lovers Planetary (GO!) Bulletproof Heart Headfirst for Halos Honey, This Mirror Isn't Big Enough for the Two of Us Our Lady of Sorrows Romance It's Not a Fashion Statement, It's a Deathwish Drowning Lessons Early Sunsets Over Monroeville This Is the Best Day Ever The Only Hope for Me Is You Skylines and Turnstiles Summertime Cubicles DESTROYA Vampire Money The Kids from Yesterday Party Poison The Foundations of Decay The End S/C/A/R/E/C/R/O/W