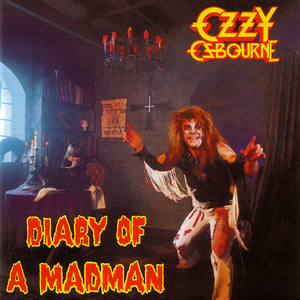 Diary of a Madman
heavy metal hard rock metal rock classic rock
"You Can't Kill Rock and Roll" is a song by Ozzy Osbourne from his second solo album Diary of a Madman. The song features acoustic/classical guitar intro played by Osbourne's guitarist Randy Rhoads. The song is an emotional, anthemic ballad about rock and roll music. It's one of the last songs, where Randy Rhoads played before tragic plane crash, which took his life. Read more on Last.fm.

Crazy Train Mr. Crowley Bark at the Moon Mama, I'm Coming Home Dreamer No More Tears I Just Want You I Don't Wanna Stop Goodbye to Romance Shot in the Dark Over the Mountain Suicide Solution Hellraiser Perry Mason Let Me Hear You Scream I Don't Know Flying High Again Road To Nowhere Diary of a Madman See You on the Other Side Crazy Train - Remastered GETS ME THROUGH Iron Man Dee Time After Time Desire No Bone Movies Miracle Man Not Going Away I Don't Want To Change The World You're No Different Paranoid Let It Die Revelation (Mother Earth) Crazy Babies Steal Away (The Night) Black Rain Rock 'n' Roll Rebel Believer Mr. Tinkertrain Thunder Underground No Easy Way Out Life Won't Wait So Tired You Can't Kill Rock And Roll Soul Sucker Lay Your World on Me Facing Hell Under the Graveyard The Ultimate Sin