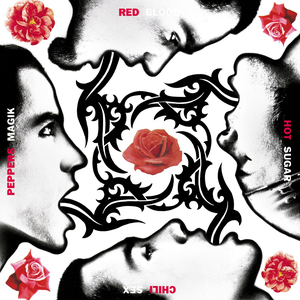 Blood Sugar Sex Magik
rock Funk Rock funk alternative Red Hot Chili Peppers
"Suck My Kiss" is the third single from the Red Hot Chili Peppers' fifth studio album Blood Sugar Sex Magik released in 1991. "Suck My Kiss" was released as a single in 1992 in Australia only; a music video was made using footage from the "Funky Monks" documentary directed by Gavin Bowden. The song was included on the band's Greatest Hits compilation. The song was covered by Richard Cheese and Lounge Against the Machine on his 2000 album Lounge Against the Machine. Read more on Last.fm.

The Red Hot Chili Peppers are an American rock band formed in Los Angeles in 1983. Their music incorporates elements of alternative rock, funk, punk rock and psychedelic rock. The band consists of co-founders Anthony Kiedis (lead vocals) and Flea (bass), as well as drummer Chad Smith, and guitarist John Frusciante, the latter of whom has been in the band across three stints. With over 100 million records sold worldwide, the Red Hot Chili Peppers are one of the best-selling bands of all time. They are the most successful band in the history of alternative rock, with the records for most number-one singles (13), most cumulative weeks at number one (85) and most top-ten songs (25) on the Billboard Alternative Songs chart. They have won six Grammy Awards, were inducted into the Rock and Roll Hall of Fame in 2012, and in 2022 received a star on the Hollywood Walk of Fame. The Red Hot Chili Peppers were formed in Los Angeles by Kiedis, Flea, guitarist Hillel Slovak and drummer Jack Irons. Due to commitments to other bands, Slovak and Irons did not play on the band's 1984 self-titled debut album, which instead featured guitarist Jack Sherman and drummer Cliff Martinez. Slovak rejoined for their second album, Freaky Styley (1985), and Irons for their third, The Uplift Mofo Party Plan (1987). Irons left after Slovak died of a drug overdose in June 1988. With new recruits Frusciante and Smith, the Red Hot Chili Peppers recorded Mother's Milk (1989) and their first major commercial success, Blood Sugar Sex Magik (1991). Frusciante was uncomfortable with their newfound popularity and left abruptly on tour in 1992. After a series of temporary guitarists, he was replaced by Dave Navarro, who appeared on the group's sixth album, One Hot Minute (1995). Although successful, the album failed to match the critical or popular acclaim of Blood Sugar Sex Magik. Frusciante and Kiedis struggled with drug addiction throughout the 1990s. In 1998, following Navarro's departure, Frusciante rejoined the band. Their seventh album, Californication (1999), became their biggest commercial success, with 16 million copies sold worldwide. By the Way (2002) and Stadium Arcadium (2006) were also successful; Stadium Arcadium was their first album to reach number one on the Billboard 200 chart. Frusciante left again in 2009 to focus on his solo career; he was replaced by Josh Klinghoffer, who appeared on I'm with You (2011) and The Getaway (2016), before Frusciante rejoined in 2019. They released their 12th album, Unlimited Love, in 2022. The Chili Peppers' mix of hard rock, funk and hip hop has influenced genres such as funk metal, rap metal, rap rock and nu metal. Kiedis said the band were early to combine "hardcore funk and hip-hop-style vocals", and suggested they had influenced Limp Bizkit, Kid Rock, and Linkin Park. Smith said, "Certainly Anthony's singing style and voice lends itself to being unique, and nobody sounds like him. The cool thing about it is we can play any style of music whether it's hard and fast, or loud or quiet, slow or medium, whatever it is; rock or funk, and it still sounds like us. I'm proud of that because sometimes bands don't have that strong personality where you go, 'Oh, that's boom, right away.'" The Chili Peppers were inducted into the Rock and Roll Hall of Fame In April 2012. The induction lineup was Kiedis, Flea, Smith, Klinghoffer, Frusciante, Slovak (represented by his brother James), Irons and Martinez; Frusciante was invited, but did not attend. Navarro and Sherman were not inducted; Sherman said he felt "dishonored". The band performed "By the Way", "Give It Away" and "Higher Ground", which included Irons and Martinez on drums. It was the first time Kiedis and Flea had performed with Irons in more than 20 years. In 2003, Rolling Stone released their first list of the "500 Greatest Albums of All Time", with Blood Sugar Sex Magik at 310 and Californication at 399. In 2012, a revised list was released, with Californication at 401. In 2020, Rolling Stone released another version of the list, with Blood Sugar Sex Magik at 186 and Californication at 286. The band received a star on the Hollywood Walk of Fame on March 31, 2022. George Clinton, Woody Harrelson and Bob Forrest unveiled the star at the ceremony. Read more on Last.fm. User-contributed text is available under the Creative Commons By-SA License; additional terms may apply.