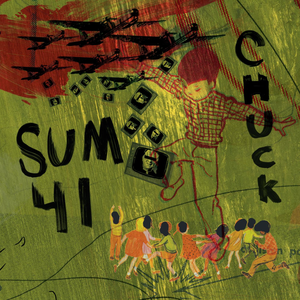 Chuck
punk rock rock punk sum 41 alternative
"Some Say" is the third single from Sum 41's 2004 album, Chuck. It was released in Canada and Japan only and had an accompanying music video. "No Reason" was released instead in the US and Europe. While playing it live on the Go Chuck Yourself live album, Deryck says "this song is about your very, very, very confused parents. The Music video starts out with the band members in a car, everyone but Deryck exits, and he starts singing. The video also features reverse editing of people doing various things Read more on Last.fm.

Sum 41 is a Canadian punk rock band from Ajax, Ontario, Canada, active since 1996. The current members, as of 2021, are Deryck Whibley (lead vocals, rhythm guitar), Jason McCaslin (bass guitar, backing vocals), Dave Baksh (lead guitar, backing vocals), Tom Thacker (rhythm and lead guitar, keyboards, backing vocals) and Frank Zummo (drums). They've released six studio albums as of February 2017. Sum 41 released their debut album, All Killer No Filler, in 2001 and achieved mainstream success through the album's first single, "Fat Lip", which reached number-one on the Billboard Modern Rock Tracks chart; it remains the band's most successful single to date. As of February 2017, they have since released five more studio albums: Does This Look Infected? (2002), Chuck (2004), Underclass Hero (2007), Screaming Bloody Murder (2011) and 13 Voices (2016). The band was formed by singer-songwriter Deryck Whibley and drummer Steve Jocz, after Whibley convinced Jocz to join his band. Jocz was a drummer in another band and Whibley was convinced that "he was the best drummer around". The duo then added Dave Baksh as lead guitarist a year later and after going through several bassists, ended up picking Jason McCaslin to complete their lineup. On May 10, 2006, Dave Baksh announced in a statement through his management company that he was leaving Sum 41 to work with his new band, Brown Brigade, which has a more "classic metal" sound. Baksh cited "creative differences" as the reason for his departure but claimed that he was still on good terms with the band. On March 9, 2010, Steve Jocz confirmed that new lead guitarist Tom Thacker will take part in the writing and recording. On April 18, 2013, drummer Steve Jocz announced he would be leaving the band via his official Facebook page, leaving Whibley as the sole founding member of the band. Their follow up album will be the band's second collaboration as a trio and first with Whibley and McCaslin as the only two bandmates from their original release left. In 2015 Frank Zummo became the drummer of the band replacing Jocz after his departure in 2013. On July 9, 2015, the band launched a PledgeMusic campaign for its comeback album. On July 23, 2015, the band played its comeback show at the Alternative Press Awards, which featured former lead guitarist Dave Baksh, joining the band on stage 9 years after officially leaving the band. The band's set also featured DMC as guest. Since the performance, rumors speculated that Dave had returned to the band rather than being just a guest. On August 14, 2015, Sum 41 announced through Alternative Press that Baksh had made his official return to the group, and will appear on the group's sixth album. On December 26, 2015, Sum 41 teased two new songs on Instagram's account. On January 1, 2016, Deryck Whibley published on the Facebook page that the new album is almost finished. The band is set to perform on the 2016 Warped Tour. On May 11, 2016, the group announced its signing to Hopeless Records. On June 1, 2016, the band announced that an album was set to be released in the fall of 2016. On June 6, 2016, the group announced that the album would be titled '13 Voices and that it is scheduled for release on October 7, 2016. The first song off of the upcoming album, "Fake My Own Death", was released on June 28, 2016 through Hopeless Records' official YouTube channel, along with a music video for the song. The song was performed on The Late Show with Stephen Colbert on October 3, 2016. The album's first official single, "War", was released on August 25, 2016.[61] On September 28, 2016, the album's eighth track, "God Save Us All (Death to POP)" was leaked online, before being officially released (along with a live music video) on September 29, 2016. Their seventh studio album, Order in Decline, was released July 19, 2019. The second single from the album "A Death in the Family" was released along with a music video on June 11. On June 18, "Never There" was released as the third single, along with a video. On July 8, the band released "45 (A Matter of Time)" as the fourth single, along with a video. On May 28, 2021, the band released a version of "Catching Fire" featuring Nothing, Nowhere, along with a music video. On February 22, 2022, the band announced a U.S. tour with Simple Plan called the Blame Canada tour. The tour is set to run from April to August 2022. On March 23, 2022, the band announced their eighth studio album, 'Heaven and Hell', which is set to be a double album. 'Heaven' will be a pop punk album much like the band's early material while 'Hell' is a continuation of the band's more recent heavier metal sound. Studio Albums: 'All Killer No Filler' (2001) 'Does This Look Infected?' (2002) 'Chuck' (2004) 'Underclass Hero' (2007) 'Screaming Bloody Murder' (2011) '13 Voices' (2016) 'Order in Decline' (2019) 'Heaven and Hell' (2022) Website: www.sum41.com Read more on Last.fm. User-contributed text is available under the Creative Commons By-SA License; additional terms may apply.