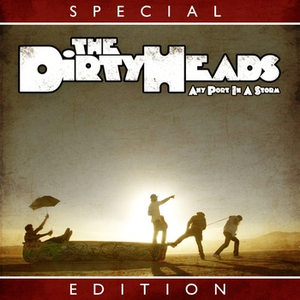 Any Port In A Storm
reggae the dirty heads alternative rock chill music guitar
According to the Lay Me Down Songfacts, The Dirty Heads wrote the song with Sublime With Rome's Rome Ramirez during a backyard barbecue at guitarist/vocalist Dustin Bushnell's house. Read more on Last.fm.

Emerging onto the Southern California music scene with a sound as original as the band members themselves, the Dirty Heads’ blend of hip-hop and classic reggae rips through the sonic surf with bold beats, fun rhythms and the relaxed vibe of feel-good lyrics. Rooted in the Orange County community of Huntington Beach, California, founding band members Jared Watson and guitarist / vocalist Dustin Bushnell met in 1996 while in high school, embarking on a friendship based on music, as well as their shared passion for surfing, skating and the endless party of the laid-back SoCal lifestyle. Early on, they spent many late nights jamming in Bushnell’s soundproof garage with a four-track recorder, writing unique acoustic hip-hop songs that featured reggae inflections. Inspired by the rock and reggae sounds of Bob Marley, Sublime, 311 and The Beastie Boys, the band’s music evolved into their distinct Dirty Heads style. To complete the Dirty Heads’ sound, the duo added percussionist Jon Olazabal and drummer Matt Ochoa, both talented, experienced musicians. With a set of solid material, the Dirty Heads were further motivated to take their craft to the next level, and they began building a loyal fan base throughout the west coast, while performing acoustically at local bars and small music venues. As they started playing in neighboring Los Angeles, the band found it necessary to charter party buses so their fans could make the 30-mile trek to their shows. Connecting with sought-after producers Steve Fox and Stan Frazier (Sugar Ray / Ashlee Simpson) the band worked long hours to polish their material and further develop their style. The Dirty Heads also recruited mixing engineer Mario Caldato Jr., best known for his work with the Beastie Boys, to add the finishing touches and create just the right blend. The band’s highly-anticipated first full-length album is entitled, Any Port in the Storm (Released on EMG through Fontana, a division of Universal Music Group Distribution - September 2008). This debut features 14 tracks that are reminiscent of the upbeat, sun-soaked Southern California party energy. The first single is the optimistic, “Stand Tall.” Any Port in the Storm also features one of the final recordings of the late music industry icon Billy Preston. Frequently referred to as “The Fifth Beatle,” Preston played on three tracks, including “Stand Tall,” “Chelsea,” and “Driftin.’ ” Other special guests on the album are drummer Josh Freese (A Perfect Circle, Sting, The Vandals), and veteran session percussionist Alex Acuna, whose A-list musician resume includes Peter Gabriel, Johnny Clegg, and Jackson Browne, to name only a few. Recently, the band’s music has been attracting attention throughout the world of entertainment. Their songs have been featured in the movie and soundtrack for Surf’s Up (Sony 2007); and the television drama, Shark staring James Woods (CBS 2007. Actor Matthew McConaughey selected the band’s music to be in his upcoming film, Surfer Dude. In addition, the Dirty Heads can be heard in Tony Hawk’s Downhill Jam video game (Activision 2007), and several other music compilations and surf/skate videos. On the marketing side, the Dirty Heads have also been included in campaigns for Etnies Jeans and Vestal Watches. Dirty Heads vocalist Jared Watson sums up their fun, uncomplicated style, “We want to be positive and entertain,” he says. “We just want to make you feel good.” And who can’t dig that? www.dirtyheads.com www.myspace.com/dirtyheads Read more on Last.fm. User-contributed text is available under the Creative Commons By-SA License; additional terms may apply.