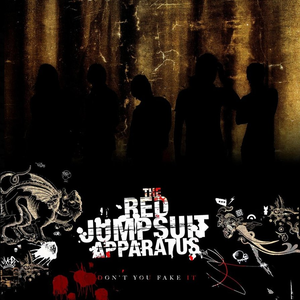 Don't You Fake It
emo alternative rock Love beautiful
When I see your smile Tears roll down my face I can't replace And now that I'm strong I have figured out How this world turns cold and it breaks through my soul And I know I'll find deep inside me I can be the one I will never let you fall (let you fall) I'll stand up with you forever I'll be there for you through it all (through it all) Even if saving you sends me to heaven It's okay. It's okay. It's okay. Seasons are changing And waves are crashing Read more on Last.fm.

The Red Jumpsuit Apparatus is an alternative rock/post-hardcore band that was originally formed in 2003 in Middleburg, Florida, about 30 miles south west of Jacksonville. The current members of the band are Ronnie Winter, the lead vocalist, Joey Westwood, bassist, Josh Burke, guitarist, & Jon Wilkes, drummer, all of whom do back-up vocals. Art often thrives in the aftermath of adversity, and since we last heard from Red Jumpsuit Apparatus, there have been plenty of variables that the five-piece alternative rock act had to endure. But for the Middleburg, Florida-based band, hardships eventually ironed out thanks to unrelenting perseverance, paving the way for the band’s incredibly ambitious (and aptly titled) The Hell Or High Water EP, release August 24th, 2010. The self-released project comes on the heels of the band’s voluntary parting of ways with Virgin Records, the company that first signed the band for 2006’s gold selling Don’t You Fake It (spawning the smash single “Face Down”), followed by 2009’s Lonely Road (which debuted in the top twenty of the Billboard 200), but eventually became more of an albatross than an anchor for the burgeoning band. According to the Reap Song facts, the first single from The Red Jumpsuit Apparatus' third studio album, Am I the Enemy?, "Reap", was released via YouTube on March 24 2011, then for download a month later on April 26, 2011. The whole album was released on August 29, 2011. Ronnie Winter - Lead Vocals, Josh Burke - Guitar Randy Winter - Guitar Joey Westwood - Bass, Vocals Kris Comeaux - Drums, Vocals www.redjumpsuit.com www.myspace.com/redjumpsuit http://www.purevolume.com/theredjumpsuitapparatus www.twitter.com/redjumpsuit www.twitter.com/redjumpsuitfl http://www.facebook.com/redjumpsuitapparatus Read more on Last.fm. User-contributed text is available under the Creative Commons By-SA License; additional terms may apply.