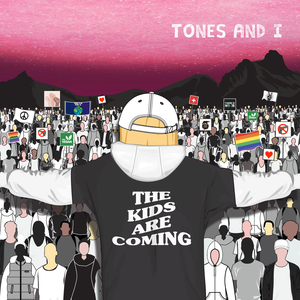 
Toni Watson, known professionally as Tones and I, is an Australian singer, songwriter, and record producer. Her breakout single, "Dance Monkey", was released in May 2019 and reached number one in over 30 countries. In 2019, she broke the Australian record for the most weeks at number one on the ARIA Singles Chart by any artist with 16 weeks. By mid-January 2020, "Dance Monkey" had spent its 24th and final week at number one, beating Bing Crosby's all-time Australian record for his version of "White Christmas", which spent 22 weeks at the top in 1943. "Dance Monkey" was accredited 16× platinum by ARIA for shipments of over 1,120,000 units, by mid-2021. Tones was the most awarded artist at the ARIA Music Awards of 2019, winning four of eight nominations. Tones and I released her debut extended play, The Kids Are Coming, on 30 August 2019, which peaked at number three in Australia, and top 10 in several countries. Her debut album, Welcome to the Madhouse, was released via Bad Batch on 16 July 2021. It debuted at number one on the ARIA Albums Chart. The album's lead single "Fly Away" peaked at number four in Australia and number 11 in the UK. Toni Watson grew up in Mount Martha on the Mornington Peninsula to the south of Melbourne, in the Australian state of Victoria. Conflicting reports state she was born either in 1993 or in 2000. The artist prefers not to disclose her birth details, "I never denied my age. I never lied about it. I just don't say anything now... Everything is wrong online." She explained choosing a music career: "One day I was at the park with my family, all my cousins and stuff, in Frankston... We were all just singing a song and my aunty was like 'oh guys, she can actually hold a note.' I think that's the earliest memory of someone actually pointing me out as someone that has an ability to sing. I was probably like 7 years old." The singer-songwriter had learned to play keyboards and drum pads while at secondary school.She started busking in Melbourne, while working in fashion retail at the Universal Store. In 2009, as Toni Watson, she created a YouTube page and posted a cappella cover versions of songs. She performed local gigs and festivals, including the Let Go festival. Tones was the vocalist for a duo in 2014, and remembered: "I started out singing in small pubs and bars in Mornington, I was singing along to a guitarist until I ended up branching out on my own." She explained her shift to a solo career: "I actually got made redundant from my retail job and with that money I bought an RC300 (loop station) and just started to try to figure it all out." She busked "up and down the east coast with her synthesizers and loop pedal, she has been building a loyal fanbase and captivating crowds with her genre-diverse style." In September 2017, the singer-songwriter travelled to Byron Bay in the Australian state of New South Wales to try busking there. At an early performance, she met Jackson Walkden-Brown who became her manager about a month later. Her busking success led to a greater commitment to a music career. The artist spent 2018 living between Walkden-Brown's home in the Gold Coast hinterland and in her van in Byron Bay, writing music and busking full-time. Later that year she won the Battle of the Buskers at Buskers by the Creek. Read more on Last.fm. User-contributed text is available under the Creative Commons By-SA License; additional terms may apply.