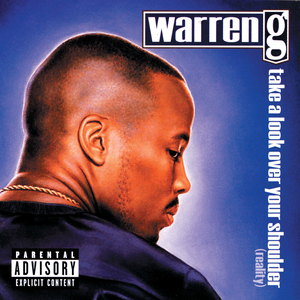 
Warren Griffin III (born November 10, 1970 in Long Beach, California), better known simply as Warren G, is a Grammy award nominated American West Coast rapper, singer, DJ and producer signed to his own label, G-Funk Entertainment. In 1990, Warren G formed the group 213 with Nate Dogg and Snoop Dogg, and in 1994 he exploded onto the Long Beach rap scene with the smash single "Regulate," a duet with Nate Dogg, and its accompanying album, Regulate...G Funk Era. He has since released a further 8 albums on Death Row Records. He grew up in Long Beach listening to his parents' extensive collection of jazz, soul and funk records, also frequently hanging out at the local record store. As a teenager, he and his friends Nate Dogg and future superstar Snoop Dogg formed a rap group called 213, after their area code. Unfortunately, all three had brushes with the law and spent time in jail, which motivated them to get jobs, also working on their music on the side. Eventually, the V.I.P. record store allowed the trio to practice and record in a back room. It was here that Snoop cut the demo "Super Duper Snooper," which G played for his half-brother Dr. Dre at a party. Dre invited all three to his studio and wound up collaborating with Snoop on The Chronic. While G also made several contributions, he opted to develop his talents mostly outside of Dre's shadow. He honed his musical skills while producing such artists as MC Breed and 2Pac. A break came when his vocal collaboration with Mista Grimm, "Indo Smoke," appeared on the Poetic Justice soundtrack. Soon after that, G recorded his debut album for Death Row. "Regulate" appeared on the Above the Rim soundtrack and was released as a single. It quickly became a massive hit, peaking at #2 on the Billboard charts and pushing the album up to the same position. The album eventually went triple platinum, with "This D.J." becoming his second Top 10 hit. Warren G took nearly three years to complete his second album, returning in the spring of 1997 with Take A Look Over Your Shoulder, which was greeted with decidedly mixed reviews and weak sales. I Want It All followed in 1999 with The Return of the Regulator appearing two years later. In 2005 he signed with Lightyear Enterntainment and released In the Mid-Nite Hour. Read more on Last.fm. User-contributed text is available under the Creative Commons By-SA License; additional terms may apply.

Regulate This D.J. Do You See Super Soul Sis So Many Ways Gangsta Sermon Recognize Party We Will Throw Now! And Ya Don't Stop This Is The Shack What's Next '94 Ho Draft This DJ Runnin' Wit No Breaks I Shot The Sheriff What's Love Got To Do With It Regulate (feat. Nate Dogg) Keep on Hustlin' (feat. Young Jeezy, Bun B, Nate Dogg) Smokin' Me Out Transformers Intro Annie Mae Lookin' At You What We Go Through Relax Ya Mind Regulate ft. Nate Dogg I Want It All Regulate - Le Boeuf Remix On My Mind Can You Feel It Reality Nobody does it better I Need A Light We Brings Heat Wheels Keep Spinning Young Fun Back Up I Want It All (feat. Mack 10) Regulate (Jammin' remix) Yo Sassy Ways Ghetto Village Prince Igor To All D.J.'s Regulate (remix) Do You See (Stepz Remix) Gangsta Love Dope Beat Weed Song Get U Down What's Next (Instrumental)