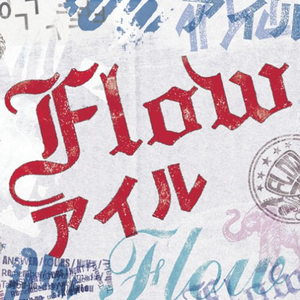 
Refers to many artists: 1. The group's base was created in 1993 when brothers Kōshi (elder: vocals) and Take (younger: guitar) began playing together. They formed Flow in 1998, and were eventually joined by Keigo (vocals), Gotō (bass) and Iwasaki (drums; joined in 2000). In 2001, the band released its first maxi single, "Flow #0". The group then released two mini-albums within the same year, both of which took nationwide indie charts by storm. "Okuru Kotoba", Flow's first cover single, was released in January 2003. It remained on the Oricon indie chart for seven consecutive weeks and also hit an impressive No. 6 on the overall singles chart. In the spring of that year, their first full-scale album Splash!!! debuted at No. 2. In July 2003, Flow released the single "Blaster" on a major label, Ki/oon Records. In April 2004, they released "Go!!!", which stayed on the Oricon Top 10 Chart for three weeks. In May 2004, Flow released their first major album Game. A string of singles followed and in July 2005 the band released its third album, Golden Coast. Since the release of Golden Coast, Flow has released two singles with new A-sides, but one of these ("Around the World/Kandata") was a double A-side release. "Colors" is the band's fourth single. The songs "Go!!!" and "Re:member" both served as opening themes to the anime series Naruto. "Days" was the first opening for Bones' Eureka Seven anime, and "Realize" was the opening for the PlayStation 2 video games based on the same series. Flow performed live in America for the first time in Dallas, Texas on September 2, 2006 at Anime Fest which was held at the Hyatt Hotel and Convention center in downtown Dallas. Flow performed "Colors" in 2006, the first opening for Sunrise's original series, Code Geass: Lelouch of the Rebellion. Their song "Answer" is the first opening theme for the live action Japanese drama Tantei Gakuen Q. They performed "Night Parade" with the hip-hop band Home Made Kazoku. In February 2008, they released a new single entitled "Arigatō", followed by Persona -trinity soul-'s new opening, "Word of the Voice" in June 2008. They performed Code Geass: Lelouch of the Rebellion R2's second opening theme "World End" released in 2008. In 2009, the band performed "Sign", the sixth opening for Naruto Shippuden. The band released a B-side compilation album on November 4, 2009. Their single "Calling" was featured as the ending for the anime Heroman. Flow returned to North America to perform at Anime Central, in Rosemont, Illinois on May 20, 2011, and FanimeCon in San Jose, California on May 28, 2010 and in May 2011. Their song "Hey!!" was the third opening theme for the anime Beelzebub and the song "Bravelue" was used as the second opening theme for the anime Eureka Seven AO. They will provide a cover of "Cha-La Head-Cha-La" as the main theme song for the film Dragon Ball Z: Battle of Gods; the song, coupled with an insert song from the film, will be released as a double A-side single on March 20, 2013.[1] ........................................ 2. Flow may also refer to Hip-hop artist flow Widner DeGruy, better known by his stage name Flow or his nickname Esho Hero, is a New Orleans based rapper signed to Young Money Entertainment. He first appeared on Lil Wayne’s 2012 mixtape “Dedication 4” and is currently working on his project titled “Withdrawalz”. Flow can also be found on “Rise Of An Empire” on the track “Fresher Than Ever”. ........................................ 3. FLOW was also an Australian rock/metal band that existed in the early 2000's. They had two releases; "The Parallel Development" in 2002 was limited to 400 numbered copies, and the "Flow" EP from 2004 featured a cover of Norwegian Wood by John Lennon. Singer Heath King was known around the Melbourne live scene for Flow and his solo work, but tragically died in 2009 as a result of a motorcycle accident. Other members Steve MacKay (guitars) and Shane Russell (drums) went on to form Twelve Foot Ninja, who Heath was originally going to perform for. Read more on Last.fm. User-contributed text is available under the Creative Commons By-SA License; additional terms may apply.